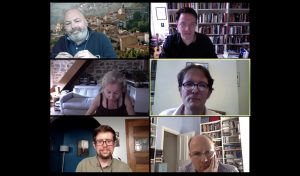 The first strand of discussion seeks to establish a strong theoretical core for the project by exploring what we mean by ‘cosmopolitanism’ and asking how various historical and theoretical models of cosmopolitanism apply to Scotland.

In order to explore these issues the workshop hosted an academic event on 24 July 2020. On this page you will find details of the day’s activities, as well as links to video and other material from the event, which are now openly available to access to anyone who is interested.

The day divided into three parts

(Click links to skip to a particular part of this event.)

The day began with a plenary session involving Stefano Evangelista from the University of Oxford. Stefano has been working on an AHRC-funded project about Fin de Siècle Cosmopolitanism. His talk provided an excellent overview of theories of Cosmopolitanism from the fin de siècle and their philosophical underpinning. His talk draws upon his expertise and ongoing research into the importance of Cosmopolitanism at the fin de Siècle, through figures such as Rabindragath Tagore, Oscar Wilde and Vernon Lee.

To watch a longer video of the live session from this part of the event – you can visit this page.

The aim of this session was to bring together experts from Modern Languages and Comparative Literature with scholars working on Scottish literature and culture to discuss and compare different models of Cosmopolitanism. Ahead of our live discussion each participant released a preliminary video online which you can watch here:

To watch the videos from this part of the event – you can visit this page where you will also find a recording of the question and answer session held on 24 July, along with debate and discussion.

The third and final part of the day consisted a lecture from Linda K. Hughes from Texas Christian University. Her talk was entitled ‘Logrolling Scotland: Andrew Lang, Scotland, and Discursive Cosmopolitanism in Longman’s Magazine’ ; it was held live via Zoom; and it was followed by a question and answer session. Linda summarised her topic:

Any given Lang causerie under the title ‘At the Sign of the Ship’ in Longman’s Magazine was a virtual schematic of Lang’s mind, a mind that inhabited expansive spatial and temporal dimensions. Each month’s reading revealed his movements of mind as his synapses fired, generating an implied psychological chart and revealing Lang’s personality, broad learning, and new reading in time present – in short, a virtual map of mental journeys that became Lang’s print discursive journeys. And these journeys were deeply cosmopolitan. As he instructed his readers in September 1892, ‘I have an authentic message to deliver to my age. This Ship is not a review…. The vessel sails at its own free will among the oceans of literature, and the skipper selects what takes his fancy’.

Lang promoted Scotland and Scottish culture by inserting the land, its literature, its history, and its language into transnational oceans of print as essential and expected elements. Though Lang had no desire to reform his readers, his discursive journeys implicitly enlarged readers’ cosmopolitan sensibilities. For Lang’s causeries made it entirely plausible that readers might expect Scotland and things Scottish to appear and enjoy equal standing alongside European cultures but also as an important world presence among American, Asian, and African cultures. To use a homelier metaphor and language, each month Lang cooked up a cosmopolitan stew of words and works and almost always ensured that Scotland was present to add its own rich flavor.

Here is video from the presentation part of the session:

Click here for video of the Question and Answer session that followed this presentation.